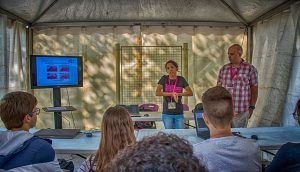 Last Friday, within the European Researchers’ Night, iecolab organised an activity for teenagers in which María and Ricardo explained the expected impacts of global change in the Mediterranean area as well as the concept of ecological model. The students had the opportunity to manipulate and execute a simplified Agent-Based Model simulating the population dynamics of the pine processionary moth, a species expected to benefit from global change. In the model, they could increase or decrease the average temperature and see how the processionary population was affected by this growth, as well as how the pine on which it feeds would develop under such new conditions. The students were very interested in the population dynamics of the pine processionary moth. They are familiar with the pine processionary because it is very easy to observe it walking in the countryside near Granada. They showed great participation and interaction with the Agent-Based Model. Furthermore it was a great example for them to understand how climate change is a real threat in their life. The original model in which this simplified version is based uses Lidar-processed images to define the distribution of the pines on the landscape. Work is on-going within the group to use satellite images to detect defoliation caused by this species and thus validate model results.